The south wall of the refectory is covered with the painting of the Crucifixion by Giovanni Donato Montorfano. He dated and signed the painting proudly on a square stone block set at the foot of the cross. Montorfano was a Lombard painter, recorded from 1473, who died in 1502 or 1503. He appears here as an example of the most advanced Lombard pictorial culture, which Leonardo radically renewed with his presence.

The Crucifixion, painted with the fresco technique – unlike the Last Supper – is still well preserved. The scene occupies the whole wall and is set within a simple architectural frame. The painting opens up the space of the refectory onto a vision of Calvary, where the three crosses divide the space into three parts.
The composition, conceived with a great concern for symmetry in the arrangement of the groups and individual figures, is populated by characters arranged in two large symmetrical clusters and depicts many details.

As a whole, however, it appears confused, although the figures are clearly delineated, enfolded in drapery which is hard, almost metallic, with brilliant contrasting colors. It is thronged with figures arranged, without being proportioned in depth, against a setting of rugged crags. In the background appears a city with buildings in ancient style, evoking Jerusalem. The story unfolds with many details, but each group is isolated: there is no drama and the air does not circulate amid the minutely depicted figures to soften their rigid outlines.

“In the same refectory, while he was working at the Last Supper, on the end wall where is a Passion in the old manner, Leonardo portrayed the said Lodovico, with Massimiliano, his eldest son; and, on the other side, the Duchess Beatrice, with Francesco, their other son, both of whom afterwards became Dukes of Milan; and all are portrayed divinely well.” 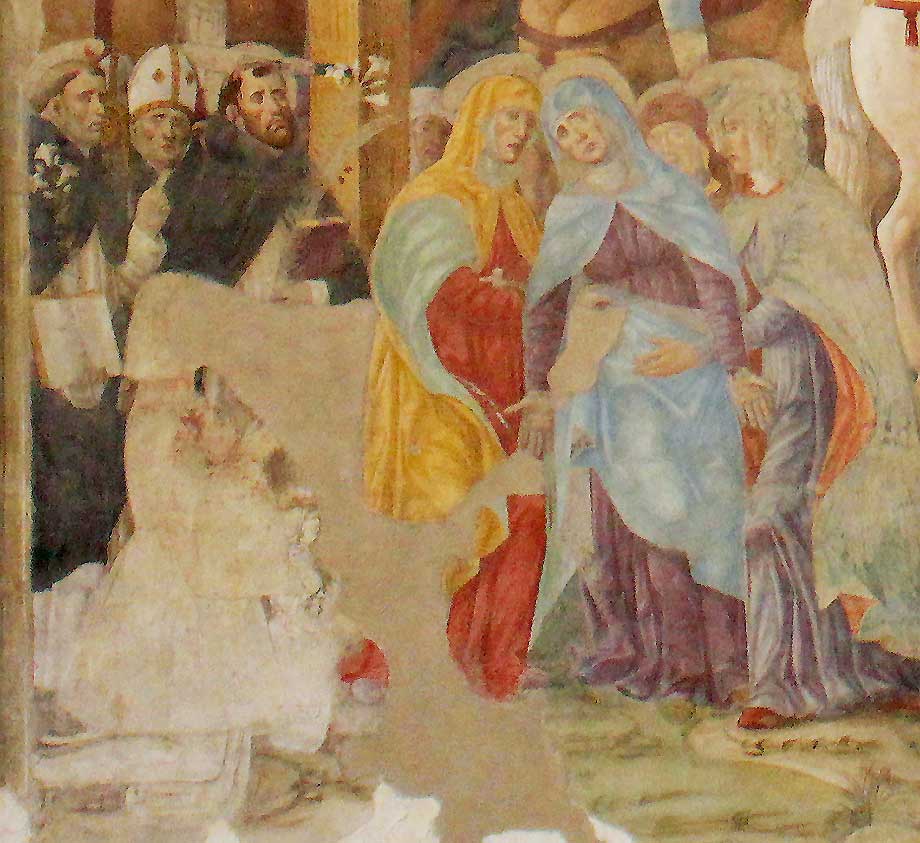 After Montorfano had completed the fresco, Leonardo probably added in the lower part the portraits of Ludovico il Moro, with his eldest son Ercole Massimiliano at lower left, and his wife Beatrice d'Este, with their son Francesco at right. Beatrice was dressed with great care and pomp but today, due to the poor state of preservation, the figure is barely legible.

In 1568 the biographer Giorgio Vasari wrote that donors were “portrayed divinely” but today, since the artist painted them on the wall when it had already dried, the color peeled off, and we can now grasp little more than a
shadow, with uncertain outlines, of what was probably a masterpiece.

However, we have an idea of their appearance and the richness of their costumes from comparison with the Pala Sforzesca, now in the Pinacoteca di Brera.
The work, which celebrates the ducal family, portrays Ludovico and Beatrice with their two sons at the feet of the Madonna enthroned with the Christ Child and various saints.
The duke and duchess of Milan, dressed in rich garments, are shown kneeling and in the same position chosen by Leonardo. 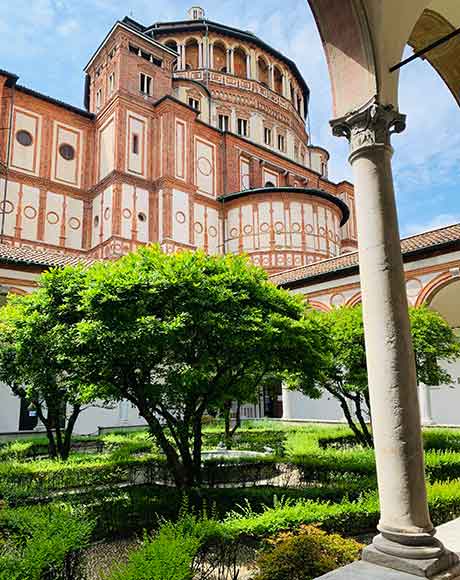 INSIDE THE LAST SUPPER

The Last Supper occupies the whole north wall of the refectory of the Dominican monastery of Santa Maria delle Grazie. This was the chamber where the friars met to eat, pray and meditate during their meals.

Every visitor to the Museum
of the Last Supper
is part of an extraordinary
experience, also made
possible by the support
of all of you.

FIND OUT HOW TO SUPPORT US +

To guarantee everyone a safe visit,
in this first experimental phase,
the visits last 15 minutes for
a maximum number of 35 people at a time
Reservations are required.

Reservations* for the Cenacolo Museum will open every three months.
(* On Tuesday, June 21 from 12 noon, tickets related to admissions for August, September, October 2022)