Each visitor to the Museum is part of an extraordinary experience

THE IMPORTANCE OF SUPPORTING A MUSEUM

Patrons of past and present

THOSE WHO HAVE CHOSEN TO PRESERVE AND PROMOTE THE MUSEUM

Supporting a museum means actively helping to preserve, protect and enhance our extraordinary heritage to make it accessible to everyone in Italy and around the world.
The Museum of Leonardo’s Last Supper is a place that tells stories from the past that can become new stories and inspire visitors of all ages and backgrounds for increasingly remarkable experiences. Your support will enable us to protect the Museum and develop an increasingly attentive and personalised visitor experience.

Patrons of past
and present

In the last 40 years, there have been many private individuals who, in their different ways, have chosen to play an active part in preserving and promoting Leonardo’s masterpiece.
Among these, the most famous example is definitely Olivetti, which was involved starting from 1982 with an active role in the great restoration campaign begun in 1977 and entrusted to the restorer Pinin Brambilla Barcilon under the supervision of the Superintendency for the Artistic and Historical Heritage of Milan, the Superintendency for the Environmental and Architectural Heritage of Milan and the Central Institute for Restoration in Rome. In addition to supporting the restoration work financially (at a cost of about 7 billion Italian lira), the company also made its technological expertise available to the project, working together to find the best possible solutions to all the technical problems such a project inevitably involved.
In more recent times, Eataly has undertaken, jointly with the Polo Museale della Lombardia, to support an impressive environmental restoration operation, by financing the purchase of two new units for filtering and purifying the air from the fine dust introduced daily by visitors to the Refectory of Santa Maria delle Grazie. Thanks to these new units, starting from October 2018, it was possible to filter up to 10,000 square meters of air per day, against the 3,500 of the previous plant, an operation that helped improve the conservation of the Last Supper and lengthen its lifespan.
Other sponsors of the Last Supper in the last 4 years have been JTI, a leading company in the world tobacco market, and Lago Spa, a well-known Italian design brand. On several occasions, they have borne the costs of extraordinary openings on holidays and evening hours, so helping offer visitors – from both Italy and abroad – new opportunities to admire Leonardo’ work.
In 2019 Allianz bore the costs for a series of extraordinary openings intended for the general public.

Art patrons today
for the Italy of tomorrow

Tax deductions of up to 65% of the amount donated for those who make donations in support of the Italian public cultural heritage.
Under Article 1 of Legislative Decree 31.5.2014, no. 83, “Urgent provisions for the protection of the cultural heritage, the development of culture and the revival of tourism”, converted with amendments into Law no. 106 dated 29/07/2014 and subsequent amendments, a tax credit was introduced for cash donations to support culture and entertainment, called the Art Bonus, as support for patronage favouring the cultural heritage.
Those who make cash donations to support culture, as required by law, will be able to enjoy important tax benefits in the form of a tax credit.

TO FIND OUT MORE VISIT THE SITE + 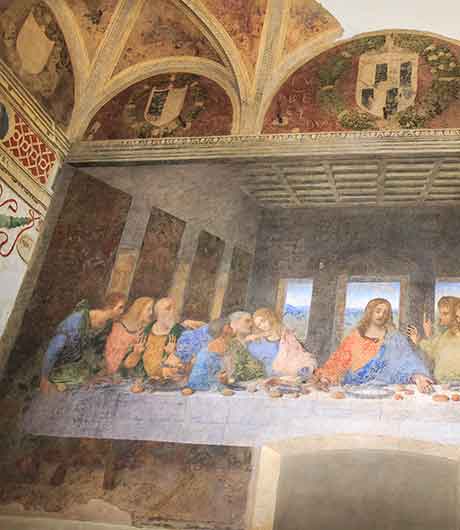 The Museum is a non-profit, permanent institution at the service of society and its development, open to the public, which conducts research into the material and immaterial records of humanity and its environment, acquires them, preserves them, communicates them and specifically exhibits them for the purposes of study, education and pleasure.

INSIDE THE LAST SUPPER

CHOOSE ONE OF THE 3 METHODS OF PURCHASE AND RESERVATION* (NECESSARY FOR ALL TYPES OF TICKETS):*On Tuesday, September 27, starting at noon, tickets related to admissions for November 2022, December 2022 and January 2023 will go on sale through the usual purchasing channels.

IN ORDER TO PROTECT THE HEALTH
OF ALL VISITORS AND STAFF,
THE METHODS OF VISITING
AND PURCHASING TICKETS
HAVE BEEN CHANGED.
PLEASE READ ALL THE INSTRUCTIONS FOR A SAFE VISIT.
ACCESS TO THE TICKET OFFICE IS PERMITTED
TO ONLY ONE PERSON AT A TIME.

IN ORDER TO PROTECT THE HEALTH
OF ALL VISITORS AND STAFF,
THE METHODS OF VISITING
AND PURCHASING TICKETS
HAVE BEEN CHANGED.
PLEASE READ ALL THE INSTRUCTIONS FOR A SAFE VISIT.
ACCESS TO THE TICKET OFFICE IS PERMITTED
TO ONLY ONE PERSON AT A TIME.

Every visitor to the Museum
of the Last Supper
is part of an extraordinary
experience, also made
possible by the support
of all of you.

FIND OUT HOW TO SUPPORT US +

To guarantee everyone a safe visit,
in this first experimental phase,
the visits last 15 minutes for
a maximum number of 35 people at a time
Reservations are required.

Reservations* for the Cenacolo Museum will open every three months.
(* On Tuesday, September 27, starting at noon, tickets related to admissions for November 2022, December 2022 and January 2023 will go on sale through the usual purchasing channels.)